Steve Bruner
Brunner is best known for delivering his laser-sharp humor on Comedy Club Network (Showtime), An Evening at the Improv (A&E), Into the Night (ABC) & The Byron Allen Show (NBC), just to name a few.

Bobby Tessel
Tessel is one of the few comics to perform on both “The Late Show with David Letterman” & “The Tonight Show with Jay Leno.” He has been doing stand-up professionally for almost 30 years, starting back in college at open mike nights in 1987. Bobby received all 4 “Yes” votes from the judges on “America’s Got Talent.”

Stephanie Blum
Throughout her career, comedian Stephanie Blum has brought audiences into hysterics with her take-no-prisoners approach to stand up. As a mother of three & a former school psychologist, this street-smart Brooklyn native has a strong opinion on just about everything, especially parenting, marriage & her most guilty pleasure, pop culture.

Leigh Cummings
Cummings has been delighting audiences with her high-energy stand-up comedy for years. She was a semi-finalist in Arizona’s Funniest Comedian contest & enjoys performing for a variety of audiences. Her comedy is versatile & includes clean comedy sets & performances for women’s groups. 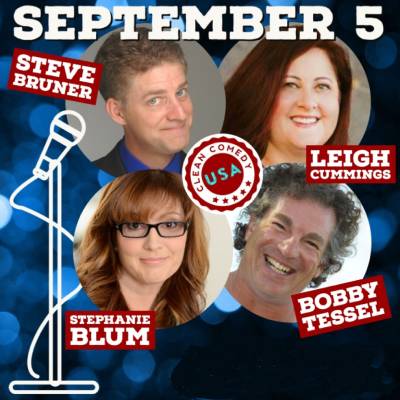